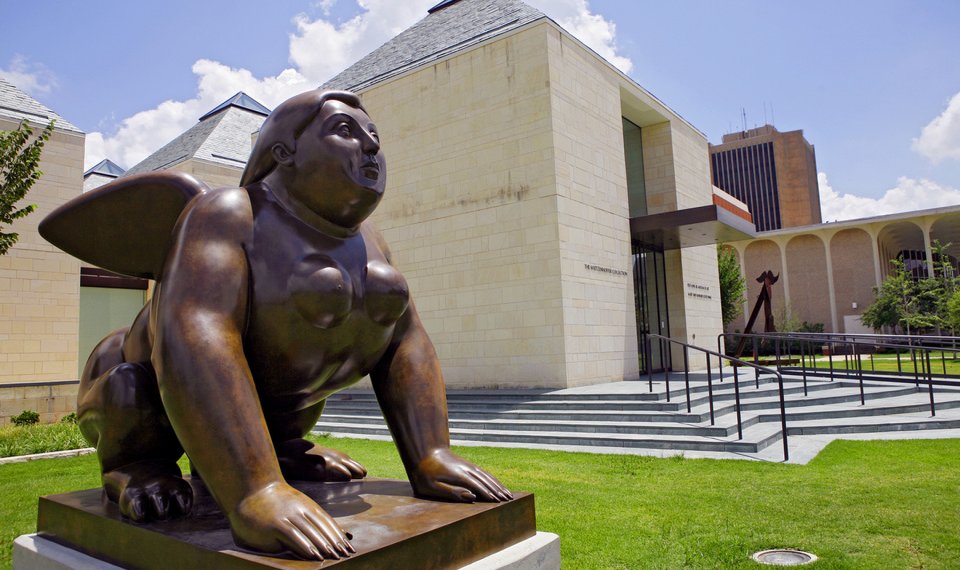 For many years the university has received gifts of artistic and scientific value from alumni, collectors and friends of the university. As a result, the Fred Jones Jr. Museum of Art, the Sam Noble Oklahoma Museum of Natural History, and the Charles M. Russell Center for Study of Art of the American West possess many valuable collections.

Located at the intersection of Boyd Street and Elm Avenue, the University of Oklahoma’s Fred Jones Jr. Museum of Art is one of the finest university art museums in the United States.

In 1936, with the acquisition of a large collection of East Asian art (750 objects), the generous gift of Lew Wentz and Gordon Matzene, the University of Oklahoma Museum of Art was officially founded and Jacobson was named its director. By this time, Jacobson had already collected more than 2,500 works of art for the university. The new museum's first galleries were in what is now Jacobson Hall. In 1948, the permanent collection was further embellished with the purchase of the so-called State Department Collection, comprised of 36 paintings from the exhibition Advancing American Art and including major works by artists such as Stuart Davis, Georgia O'Keeffe, and Edward Hopper.

Jacobson's vision of a permanent facility to house the art finally came to fruition in 1971, when Mr. and Mrs. Fred Jones of Oklahoma City donated a fine arts building to the university in memory of their son, Fred Jones, Jr., who had died in an airplane crash during his senior year at the University of Oklahoma. The resulting structure, the Fred Jones Jr. Memorial Art Center, housed the Museum of Art, which contains 15,000 square feet of exhibition space, the School of Art, and the administrative offices of the College of Fine Arts. In 1992, the Museum of Art was re-designated the Fred Jones Jr. Museum of Art.

Over the years, the museum's permanent collection has grown exponentially through the generosity of donors such as Max Weitzenhoffer and Jerome M. Westheimer Sr. In 1996, with an initial gift of $1 million from Mrs. Fred Jones, OU President and Mrs. David L. Boren spearheaded a successful fundraising campaign to acquire the important collection of the late Richard H. and Adeline J. Fleischaker, which is composed primarily of Native American and Southwestern art.

2000 was a watershed year in the development of the FJJMA's collections, with the gift of the Weitzenhoffer Collection of French Impressionism, which consists of 33 works of art by Degas, Gauguin, Monet, Pissarro, Renoir, Toulouse-Lautrec, Van Gogh, Vuillard, and others. It is the most important collection of French Impressionism ever given to an American public university. The gift came to the university at the bequest of Clara Weitzenhoffer, an art collector and longtime University of Oklahoma supporter.

In 2005, the museum opened a new addition, designed by acclaimed architect Hugh Newell Jacobsen of Washington, D.C. Named in honor of Mary and Howard Lester of San Francisco, the wing added more than 34,000 square feet to the earlier 27,000-square-foot building. The Lester Wing features galleries for the Weitzenhoffer Collection, additional galleries, a 150-seat auditorium, an orientation room, a classroom, a museum store, and a new main entrance. Jacobsen designed the Lester Wing as a sequence of limestone pavilions having pyramidal slate roofs with glass skylights at their apexes. The building features an abundance of natural light, pure geometries, clarity of plan, and well-proportioned, top-lighted galleries that have an intimate, human scale. The resulting serene, contemplative spaces put the visitor in the proper frame of mind for viewing works of art.

The Adkins Foundation Board announced in July 2007 that the Fred Jones Jr. Museum of Art and the Philbrook Museum of Art in Tulsa had been jointly selected to steward the Eugene B. Adkins Collection. The joint partnership by OU and the Philbrook was among many proposals submitted by leading museums across the country. The Adkins Collection, which is valued at approximately $50 million, features approximately 3,300 objects, including more than 400 paintings by such distinguished American artists as Maynard Dixon, Worthington Whittridge, Andrew Dasburg, Alfred Jacob Miller, Victor Higgins, Charles M. Russell, Nicolai Fechin, John Marin, William R. Leigh, Leon Gaspard, and Joseph H. Sharp. The collection also includes impressive examples of Native American paintings, pottery, and jewelry by such famed Native American artists as Jerome Tiger, Maria Martinez, and Charles Loloma.

In spring 2010, Arizona-based James T. Bialac decided to give his private collection to OU because of the university’s commitment to excellence in education. The multimillion-dollar collection of more than 4,500 works represents indigenous cultures across North America, especially the Pueblos of the Southwest, the Navajo, the Hopi, many of the tribes of the Northern and Southern Plains, and the Southeastern tribes. Included in the James T. Bialac Native American Art Collection are approximately 2,600 paintings and works on paper, more than 1,000 kachinas, and 400 works of varying media, including ceramics and jewelry, representing major Native artists such as Fred Kabotie, Awa Tsireh, Fritz Scholder, Joe Herrera, Allan Houser, Jerome Tiger, Tonita Peña, Helen Hardin, Pablita Velarde, George Morrison, Richard “Dick” West, Patrick DesJarlait and Pop Chalee.

The Stuart Wing, which opened in October 2011, provides a new 18,000-square-foot expansion of the Fred Jones Jr. Museum of Art to house the museum’s many collections acquired within the past 15 years. Designed by noted architect Rand Elliott, the addition is named to honor a $3 million lead gift from the Stuart Family Foundation made possible by the generosity of OU Regent Jon R. Stuart and his wife, Dee Dee, a member of the art museum’s board of visitors. Construction on the new wing began in 2009 and includes renovations to the original 1971 building and the addition of the Eugene B. Adkins Gallery, a new photography/works on paper gallery, and new administrative offices. In all, the new Stuart Wing, with renovations, includes 27,480 square feet of exhibition space. Combining that with the 2005 Lester Wing’s 12,106 square footage, the total museum exhibition space, is approximately 40,000 square feet.

In November 2012, the University of Oklahoma announced a new annual $60,000 gift from the OU Athletics Department that now provides free admission for all visitors to the Fred Jones Jr. Museum of Art in perpetuity. This unique collaboration between athletics and art is one of the first in the United States creating free admission for a university art museum through a university athletics program.

Lectures, videos, and films complement the permanent collection and special exhibitions. Programs such as Art “à la Carte,” Family Days, Art Adventures, Tuesday Noon Concerts, and Art After Noon utilize the museum’s galleries, classroom, and auditorium and make the arts accessible to tens of thousands of visitors throughout the year. Tours are offered to all ages.

The Sam Noble Oklahoma Museum of Natural History, located just south of the intersection of Timberdell Road and Chautauqua Avenue, has extensive collections in earth, life and social sciences, including more than seven million specimens and artifacts. These collections represent a vast and irreplaceable resource of the natural and cultural heritage of Oklahoma and many other parts of the world. The SNOMNH is the official museum of natural history for the state of Oklahoma as well as an independent research unit of the University of Oklahoma. The museum curators conduct original research and teach in their collection areas, while overseeing the research of graduate students and visiting scientists. The curators also maintain an active lending program that makes specimens available to scholars throughout the world. The collections provide the basis for a variety of exhibitions, public service programs and educational activities. Major collection areas include vertebrate and invertebrate paleontology, archaeology, classical art, entomology, ethnology, herpetology, ichthyology, invertebrate zoology, mammalogy, ornithology, paleobotany and Native American languages.

The 198,000-square-foot facility contains space for extensive permanent and traveling exhibits as well as a café, gift shop, education classrooms and a hands-on Discovery Room.

With collections that document 500 million years of Oklahoma’s natural history, the SNOMNH is one of the finest university-based natural history museums in the world. The museum is open 10 a.m. to 5 p.m. Monday through Saturday and 1 to 5 p.m on Sunday. It is closed Thanksgiving, Christmas and New Year’s Day.

The museum also is available for after-hours rental for banquets, receptions and other events. For more information, visit the museum’s website or call (405) 325-4712.

Charles M. Russell Center for the Study of Art of the American West

Founded in 1998, the Charles M. Russell Center for the Study of Art of the American West is the first such university-based program in the nation. The center, which opened to the public in the fall of 1999, is dedicated to the pursuit and dissemination of knowledge in the field of American art history as it relates to the western United States. Through its resource center, national symposia, course offerings and related outreach programs, the Russell Center actively engages students and the public in developing a better understanding of, and appreciation for, 19th- and 20th-century Euro-American and Native American artistic traditions. Special emphasis is given to art of Charles M. Russell and his contemporaries.

The Russell Center was established concurrently with the Charles Marion Russell Chair, an endowed professorship in art history at the University of Oklahoma. Both the center and the endowed chair were made possible through a generous gift from the Nancy Russell Trust and matching funds from the state of Oklahoma. Administered through the School of Visual Arts and the Weitzenhoffer Family College of Fine Arts, the Russell Center operates in concert with several of the University of Oklahoma’s other distinguished branches including the Western History Collections, Fred Jones Jr. Museum of Art, Sam Noble Oklahoma Museum of Natural History, and the departments of History, Literature, Native American Studies and Film and Video Studies. The Russell Center also actively interfaces with institutions across the country, including museums of Western art and universities that support related programs or collections of Western material culture or art.

The Russell Center is both a facility and a program designed to inspire and excite interest in the study of American Western art, an aesthetic history that enjoys both a regional and a national dimension. While a branch of American art, Western art also incorporates European artistic traditions that have, over time, been adapted to themes, experiences and environments unique to the western United States. Art of the American West also encompasses Native American cultures as both subjects of art and as creative forces.

During much of America’s history, the West has been a defining national symbol. Although considered a region by Euro-Americans, the West was also a myth, a dream and inspiration, a collection of individual experiences, a process of westering and a destination. For Native Americans, however, process and destination played little part in their thinking. For them, the West was something spiritual as well as physical, a sacred domain as well as a common home. The center’s course of study in the art of the American West seeks to discover what the West symbolized and to whom and why.